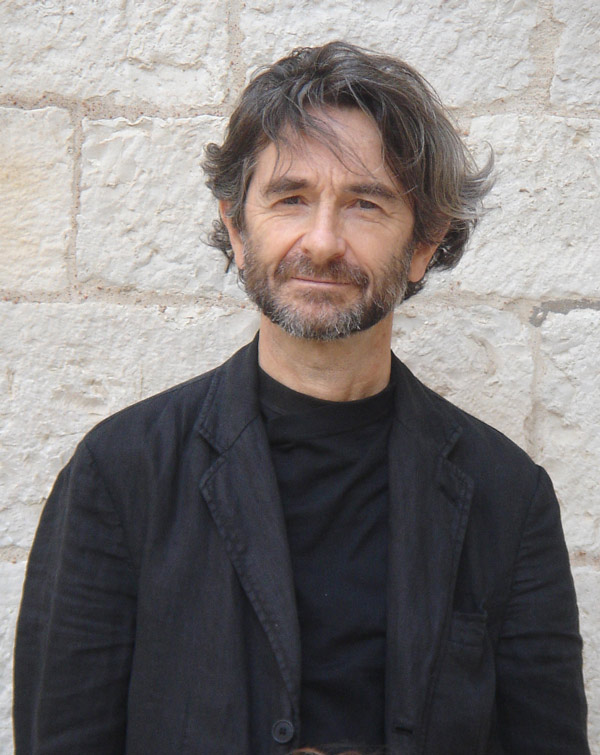 Cristiano Toraldo di Francia was born in Florence in 1941 (†2019).
After High School he enrolled at the University where he graduated in Architecture in the academic year 1967-68 with a thesis entitled “Holiday machine on the Calabrian coast,” which next year was published by Domus n ° 479 and JID n ° 170: its drawings are now part of Centre Pompidou and MAXXI collections.

Superstudio and the research on architectural discipline

In December 1966 he founded Superstudio with his colleague Adolfo Natalini and participated in the first exhibition of Superarchitettura, which was documented by Domus and Architectural Design and was rebuilt for the exhibit at Galleria Carla Sozzani in April 2007 in Milan.
His work in architectural research and re-foundation of the language of architecture has been documented by several international publications and has been presented in major museums and art exhibitions: from the Milan Triennale (1973) to the Venice Biennale (1978, 1996, 2014), the Museum of Modern Art (1972, 2002) at the Metropolitan Museum in New York (1976). The drawings and architectural projects, together with objects of design, are part of several public and private permanent collections.
In 1969 they won the Trigon Prize assigned by the city of Graz, which gave birth to an exhibition at the Galerie Nacht St. Stephan in Wien.
Superstudio has been invited in 1972 to partecipate in the exhibition “Italy: The New Domestic Landscape” at the MOMA in New York, where they presented within their built “environment” the short film “Supersuperficie: a life without objects”.
From 1973 to 1975 an exhibition entitled “Mindscapes” dedicated to Ettore Sottsass and Superstudio has been presented in the United States first at the Walker Art Center in Minneapolis and then at the Contemporary Art Center in Cincinnati, the Everson Museum of Art in Syracuse, at the Johnson Museum Ithaca, the Art Museum of South Texas in Corpus Christi, at the Fort Worth Art Center, the Long Beach Art Museum in Los Angeles, the Joslyn Art Museum in Omaha.
In 1982 the city of Florence dedicated a retrospective exhibition at the Accademia Gallery and in that occasion a book edited by Gianni Pettena entitled “Superstudio 1966-1982” was published by Edizioni Electa.
At the same time CTF edited the illustrated book entitled “Superstudio and Radicals” for Moryama editions (Tokyo, 1982).
In the year 2000 Centre Pompidou acquired for its Collection a significant portion of the projects and photomontages from Superstudio Archives. In the new arrangement of the Centre in Paris in 2001 two rooms were set up with the materials of Superstudio in the floor that hosts the permanent collection of modern and contemporary art.
The Design Museum in London organized in march 2003 an exhibition on the theoretical work of Superstudio entitled “A world without objects”.
The exhibition then moved to New York divided in two galleries at the same time: Pratt Art Gallery and Storefront. Subsequently, the exhibition was moved to Los Angeles and then to Holland at De Vleeshal Zeeuws Museum.
On this occasion Skira editions published a book called “Superstudio, a world without objects” edited by Bill Manking and Peter Lang.
Since January 2000 Toraldo di Francia had transferred the “Superstudio” photographic images Archive in Filottrano in Via Fratelli Rosselli where he started the digital transferring of many images .
From this translations he organizes a series of exhibitions entitled “Superstudio / Backstage” that collect 90 digital prints in A3 documenting some of the well known photomontages and a series of new images on the activities of the group. The shows begin at Cartiera Papale in Ascoli Piceno, move to the Schola Foundation in Jesi, the Centre for Contemporary Art Luigi Pecci in Prato and in 2013 to the “Pescheria” Foundation in Pesaro.

The new MAXXI in 2010 acquires several drawings and lithographs of Superstudio, which after the restauration are shown in an exhibition at the MAXXI Centro Archivi, Galleria 1, in 2011.

In 1980 after Superstudio dissolved, he continued professional work independently, first in Florence together with Arch. Andrea Noferi then from 1994 in the Marche region in Filottrano associated with the architect Lorena Luccioni, who became his wife in 1999.

In 2003 Eduardo Vittoria asks CTF to take part to the foundation of the School of Architecture and Industrial Design of the University of Camerino.
Toraldo di Francia has always been involved in different areas of design, from architecture to industrial design.
He designed among others for Anonima Castelli, Zanotta, Poltronova, Flos, Calzolari, Giovannetti, Breda, Palagio, Pica.
For the industry we can mention the series of tables “Quaderna” for Zanotta, the Integrated Wall System for Anonima Castelli, the body and interior for the train “Circumvesuviana” train for Breda, then the seating system “Franny” for Fasem, the sessions “Circus” for Calzolari, the ventilated terracotta wall “Earth” for Il Palagio, ceramic s for Dolfi, silver objects for Pampaloni, the pharmacy stand systems for Ataena.
He has designed interiors set-up and exhibition spaces including the exhibition “Maestri della Carrozzeria Italiana” at the Centre Pompidou in Paris in 2000.
CTF designed offices and commercial interiors for leading Italian companies, among which are Anonima Castelli, Enrico Coveri, Gherardini; credit institutions as Banca Toscana, the Sanpaolo di Torino and others until the recent Banca di Credito cooperativo del Chianti Fiorentino headquarters.
The Master Plan of the city of Tropea is completed in 1998.
He has designed public spaces for the towns of Rome, Florence, Ancona, Pesaro, Macerata, Prato, Livorno, Sesto Fiorentino, Sancasciano, Chiusi, Montepulciano, Chianciano, Filottrano.
For the urban public transport sector he designed the system of waiting shelters for the Ataf city bus in Florence and was consulted for the stop platforms and covers of the new tramway.
For the State Railways has designed the Statuto train station in Florence and the Rignano station with its town Piazza. He also designed the Peretola station for the new fast line Florence-Pisa, and the system of unattended stops along the same line.
For the Municipality of Prato and FS he designed “Il Serraglio” interchange center with underground parking for 700 cars, railway coaches, services, offices, restaurants, as well as facilities for the University.
For the city of Macerata he designed the new coach station and the adjacent complex for residences, commerce and offices in Piazza Pizzarello.
For RFI designed the resettlement of Ancona central railway station, the Piazzale Rosselli and the new multifunctional building in front of the new bus station.
The experience gained in the construction of clinics and pharmacies allowed him to publish two books on the design of these particular spaces for Alinea editor.
He has partecipated in national and international design competitions.
Since 2012 he is the editor in chief of MAPPE magazine for Gagliardini publisher.

In 1974 he was invited by the Faculty of Architecture of Australia to take part in the itinerant students National Congress, during which he lectured in several cities.
Since 1974 he taught and lectured at various universities in Europe, Japan and the United States (Paris La Villette, Architectural Association, Nihon University, the Berlage Institute, Rietveld Akademie, Cornell University, Syracuse University, Rhode Island School of Design, Kent State University, San Luis Obispo Polytechnic, Pomona Polytechnic, California State University).
In 1992 he was invited to take part in the founding of the first Architecture Faculty in Marche region for the University of Camerino in the city of Ascoli Piceno, for which he has been Associate Professor of Architectural Design.

Since 2005 he has been entrusted with the course of Landscape Design for the first year of the Laurea Magistrale.

He has published several books on architecture and landscape design and directed the series “Signs and Designs” for Alinea publishing company.
Since 2003, he has organized an international workshop at the School of Architecture of Ascoli entitled Coast2Coast which brings together students and teachers from various foreign universities to discuss and research around the coastal urbanization issues, with particular reference to the theme of the “Adriatic City”.
In 2006 he was invited by the Nihon University in Tokyo to receive a Career Award and that was the beginning of a tour of lectures, that took him from Tokyo to London at the Architectural Association, and in Paris at the Centre Pompidou as a result of its participation the exhibition “Les Mouvement des the images.”
In April 2007 organized by the Province of Ascoli Piceno and the University of Camerino the international conference entitled ” La città postindustriale: nuovi destini per le aree dimesse ” at the Cartiera Papale in Ascoli Piceno.
This conference was the beginning of a research carried out by a team of which Toraldo di Francia has been part, funded by the Ministry of Education for the preparation of an agenda to address the public operators, on the quality of the conversion of abandoned industrial sites and the restoration of degraded areas in the Marche region.
In 2006 with the aim of promoting the studies and plannings of the Faculty of Architecture for the Esina Valley, organizes in Jesi with the support of the Culture Office Department a conference and a double exhibition: one at the prestigious Pinacoteca di Palazzo Pianetti with the title “From Lotto al Mare”, the other at the Salara of the Palazzo della Signoria, entitled “Aesiscapes”, where 9 thesis were exposed to prove the University task in designing quality systems for Valle Esina urbanization.
The phenomenon of the conurbation of the “Adriatic City”, which brings together issues relating to the new relationship between town and country, between nature and artifice, between infrastructure and natural environment, have been collected in the book “X-scapes”, published by Alinea Edizioni in December 2005, which highlights a number of themes of the new attitude towards the landscape.
From 2005 to 2011 CTF has taught Landscape Design and published the books “Trees /Alberi” in 2007 and “PFF / dell’indeterminazione programmata” in 2010, as support of an exhibition of student’s projects for the Foglia River Park in Pesaro.
Since 2009 he has been asked to teach also at the Master of Science in Industrial Design, where since 2012 leads an experimental course on clothes construction and soft design, with particular interest in issues of reuse and recycling, in collaboration with the Marche clothes District.
Since 2011, he ends his role for seniority at the School of Architecture and Industrial Design “Eduardo Vittoria” of the University of Camerino, where he continues to teach as Adjunct Lecturer.